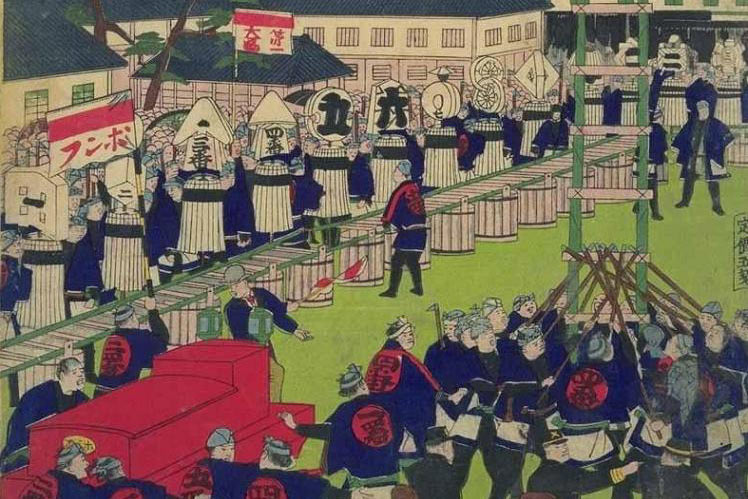 In Edo-era, The town of Edo was suffering big fire again and again so that Tokugawa shogunate set various firefighting organisations and systems each time. In 1720, they set Machi-Hikeshi (town’s firefighter), called “Iroha group 47”. They were in charge of the east of the Sumida river. It became “group 48” afterwards and joined group 16 which were in charge of Honjo and Fukagawa.

Machi-Hikeshi is the private firefighter organisation. When a fire happened, the bell in a guard station was bitterly beaten. Firefighters who have a tattoo on their whole body poured water over themselves and rushed to the fire scene with their quilted short coats and loincloth. At that time, they immediately hanged their group Kifuda(Keshifuda) on houses near the fire site. It is like in a movie. They bravely swing around their fireman’s standard and break down houses to extinguish a fire. It all started from this time. They fearlessly jump into a fire at the risk of their life.
Keshifuda has been getting penetrated among Edo citizens as a lucky charm to avoid a fire and disaster because it reminds us those fireman’s spirit.

Afterwards, it is mixed together with Senjahuda(Originally wooden tag), talisman, substitution tag. Then among Edo’s people with refined tastes, it became “Kifuda” which represents a stylish lucky charm made by artisans. It is the origin of Kifuda as a lucky charm which avoids disasters and calls the Kichijo(the goddess of happiness and wealth). Our Takeshin, we purify ourselves and pray before making Kifuda because it has a significant meaning to you as well.